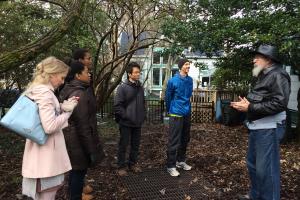 Sunday, March 19, we met with Scott Sklar in Clarendon to tour off-grid buildings. Scott is not only the owner of the Stella Group and one of the leaders on sustainable energy in the DC metro region (and beyond), but also the president of the Sustainable Energy Coalition which Ecologic Institute has just very recently joined.

Prior, Scott Sklar served for 15 years simultaneously running two Washington, DC-based trade associations, as Executive Director of both the Solar Energy Industries Association and the National BioEnergy Industries Association. Before his move to SEIA and NBIA, he was Political Director of The Solar Lobby, a renewable energy advocacy organization founded by the nine major national environmental organizations. Before joining “the Lobby”, he was Washington Director and Acting Research Director of the National Center for Appropriate Technology (NCAT), founded by Senate Majority Leader Mike Mansfield and technologist EF Shumacher. This federally-funded applied technology organization assisted low income communities in utilizing energy efficiency and renewable energy.

Sklar began his energy career as an aide to Senator Jacob K. Javits (NY) where he focused on energy and military matters for nine years. During his Senate tenure, he cofounded the Congressional Solar Caucus that lead many of the innovative legislation promoting renewable energy in the 1970’s. Sklar is co-author of two books, The Forbidden Fuel, published in 1985 and updated and re-released in 2010 by University of Nebraska Press, and theConsumer Guide to Solar Energy, which was re-released for its third printing.

Scott Sklar serves on Boards of Directors of national nonprofits including, Business Council for Sustainable Energy (climate change) and The Solar Foundation, and Chairs the Steering Committee of the Sustainable Energy Coalition (national efficiency and renewable energy think tanks, industry associations, and advocacy groups). Scott Sklar lives in a solar home in Arlington, Virginia with solar water heating, geothermal heating & cooling, and photovoltaics/battery system. He has a unique PV system on the roof of his Washington, DC office overlooking Lafayette Park in front of The White House, and a zero energy VA office building with PV roofing shingles, small wind turbine, and a hydrogen fuel cell.

Scott Sklar was selected as the Renewable Energy Industry Representative onto REEEP No Am Adv Committee of  UN Int’l RE Activity in August 2006 thru December 2009. REEEP is a Public-Private partnership  and was launched by the United Kingdom along with UN agencies UNIDO  and UNDP, 30 other governments.

Sklar is an Adjunct Professor at The George Washington University teaching two unique interdisciplinary courses on sustainable energy, and an Affiliated Professor with CATIE, an international graduate university located in Costa Rica focused on sustainability for Latin America.

And finally, Sklar heads two small non-profits: the Center for Small Business and the Environment, as well as The Global Solar Initiative.